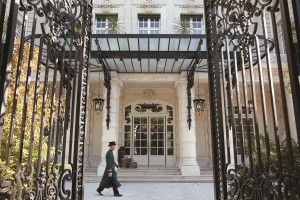 On the Chaillot hill next to the Seine river, facing the Eiffel Tower, only two steps from the Trocadero square, the Guimet museum, the Tokyo palace, the museum of Man, the Modern Art museum, the Marmottan museum, the Champs Elysées avenue and the Montaigne avenue, since December 2010, the Shangri-La opens its doors over Paris.

Let’s enter in this palace of modern times, ancient property of Roland Bonaparte, Napoléon Bonaparte’s Grandnephew. In those places involved with history, aristocracy and haute bourgeoisie were used to meet with the illustrious family. Between French tradition and inspirations from Asia, let’s be welcomed as a Prince in the City of Lights.

To restore glory and shine to this jewel of architecture, 4 years were required. 4 years, where high level craftsmen from France and Europe have implemented their ancestral know-how on this 20,000 sqm (215,000 sqft) project under the watchful eyes of the architect Richard Martinet, interior designer Pierre-Yves Rochon and Historic Monuments.

After crossing the gates of the Palais Iena, being stopped in front of the massive facade with lion’s heads and blazons and the lush greenery, let’s enter in majestic lobby of the Shangri-La Paris. Let’s step by the five types of marble of the cut paving to arrive in the heart of the rotunda, overlooked by its elegant archway and the world map. You might lead to the main staircase and its finely craft coppers, historic witnesses of the princely celebrations of yesterday, to reach the first floor. At that time, you would have thousand chances to admire some treasurers offered by the property, such as moldings covered with gold leaves, bronze sculptures, crystal chandeliers, woodwork, alcoves and dressed-stone columns.

Symbol of luxury and refinement at the heart of the very posh XVIth arrondissement of Paris, between Asian art de recevoir and French art de vivre, the Shangri-La Paris culminates today in the very exclusive circle of the Parisian palaces, providing acclaims to the Palais Iena. 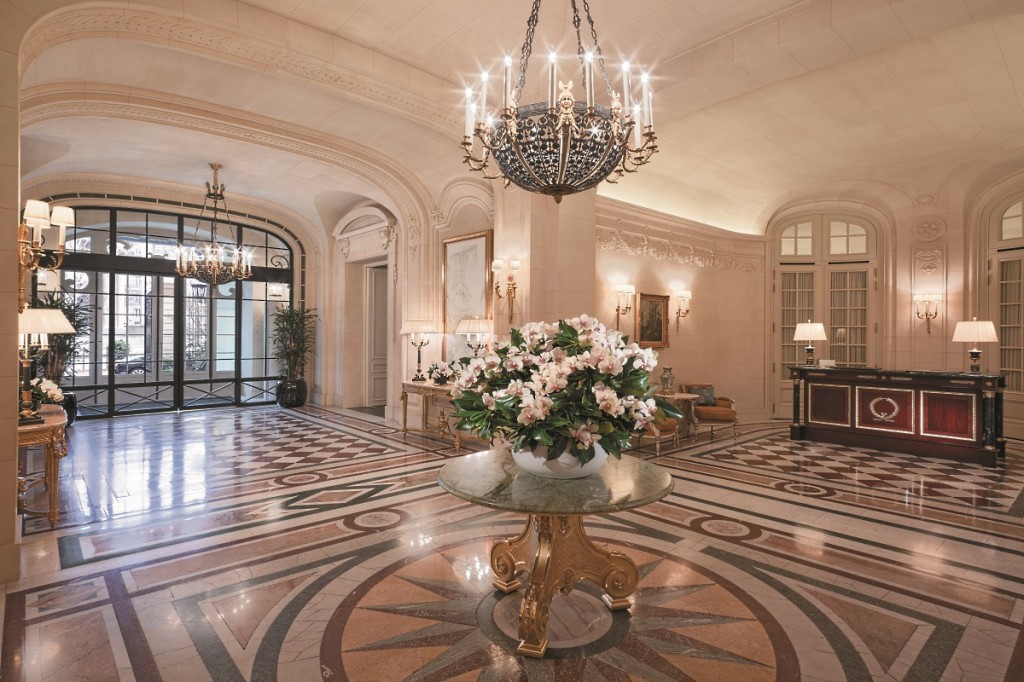 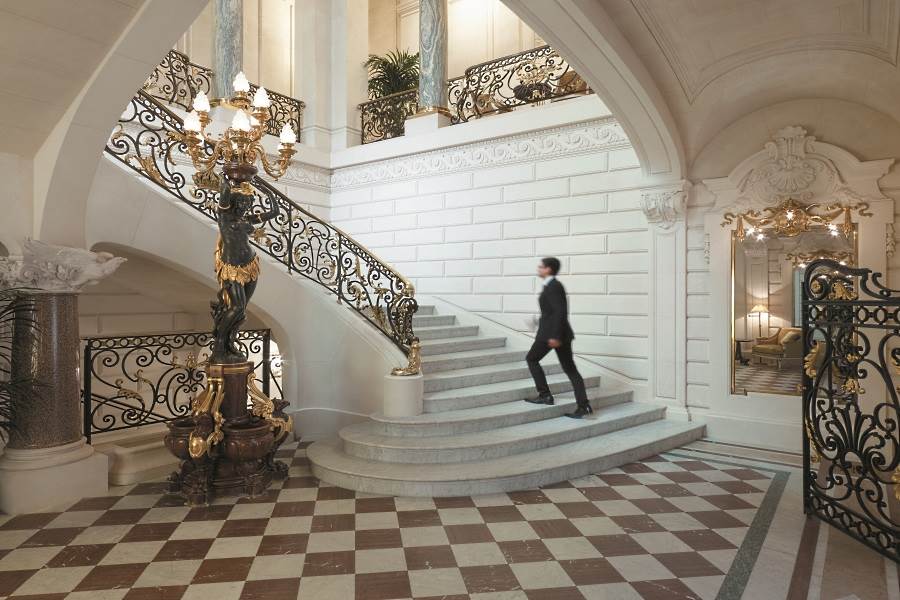 The Shangri-La Paris broads 65 guest rooms and 36 suites. 40% of the rooms and 60% of the suites offer an impressive rendezvous with the Eiffel Tower. Half of them have a balcony or a terrace.

Except of the 3 signature suites, most of the rooms and suites of the Shangri-La Paris are dressed in blue, white, gold and ecru tints, emblematic colors of the Empire. The textures refinement and decoration have been meticulously chosen to echo the story of the place and today connoisseurs’ expectations. Every bathroom is dressed up with marble, warming floor and television embedded in a large mirror. The amenities come from the Bulgari house. The perfume is White Tea, predilection fragrance of the Shangri-La hotels. Please note, that some of the bathrooms were created with an Eiffel Tower view. 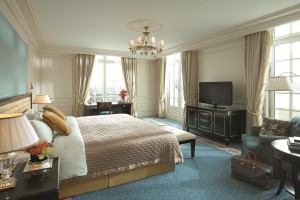 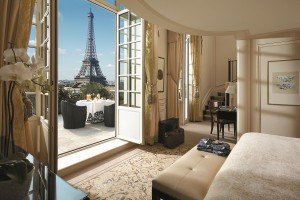 Occupying 150 sqm (1,614 sqft) including a 40 sqm (430 sqft) terrace, the Chaillot Suite is an elegant mix between the classical architecture and modernity. Macassar Ebony, mole and celadon tones with few Chinese elements integrated in the background. The bedroom walls are dressed up with an original fabric from Donghia showing a forest inviting you to the adventure in the heart of the city. Bedside tables covered with mirrors have been specially designed by Pierre-Yves Rochon. Set as a private flat, a living room and a private bar allow meeting with guests.

At the 7th and highest floor of the hotel, the Shangri-La Suite and its 220 sqm (2,368 sqft), including a 100 sqm (1,076 sqft) terrace, offers a spectacular view over the Eiffel Tower and Paris. The sight covers Paris to the Trocadero, the Grand Palais, Notre Dame de Paris, the Alexandre III Bridge, the Panthéon, the Invalides, the Quai Branly and the Seine river through a 14 meters large bay window. Here, Pierre-Yves Rochon wanted to integrate sober classic French furniture from the Directory Period and the Empire-style. A clever play of mirrors invites the Eiffel Tower wherever you stand in the Suite, lying in bed or bathing in the jacuzzi. Walls are dressed up with pearly leather fabrics perfectly blending with rich curtains from Canovas and the Art Deco details. 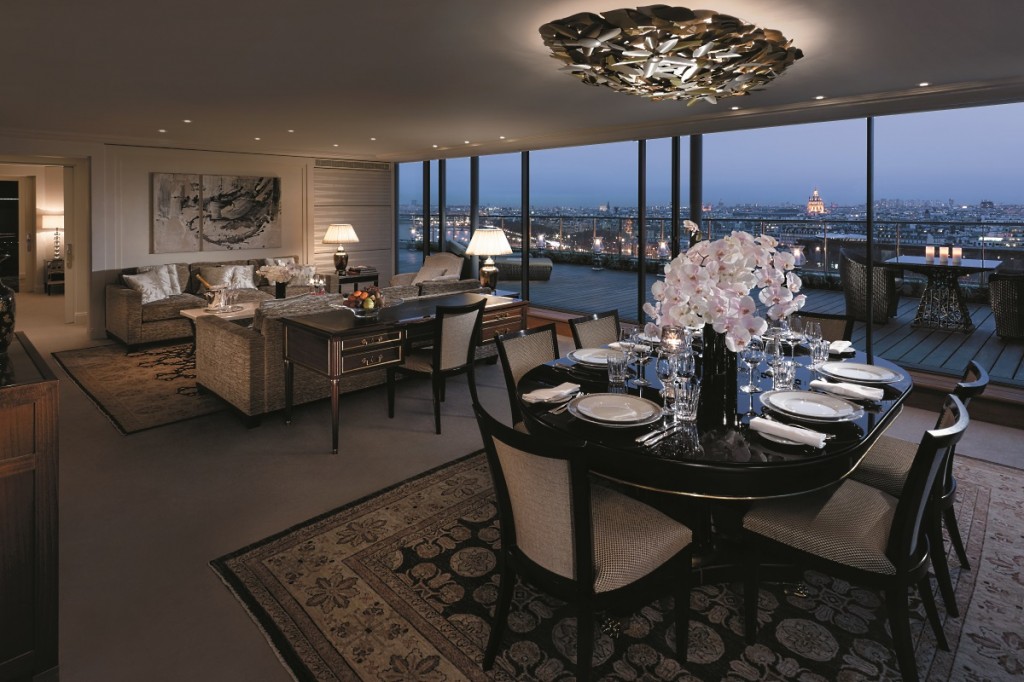 One fact deserves your attention : the 7th and highest floor of the Shangri-La Paris is nearly located at the same height of the Eiffel Tower’s first level. Gustave Eiffel who was the owner of a house in this area, prohibited the construction of any high building in this perimeter around his work of art. 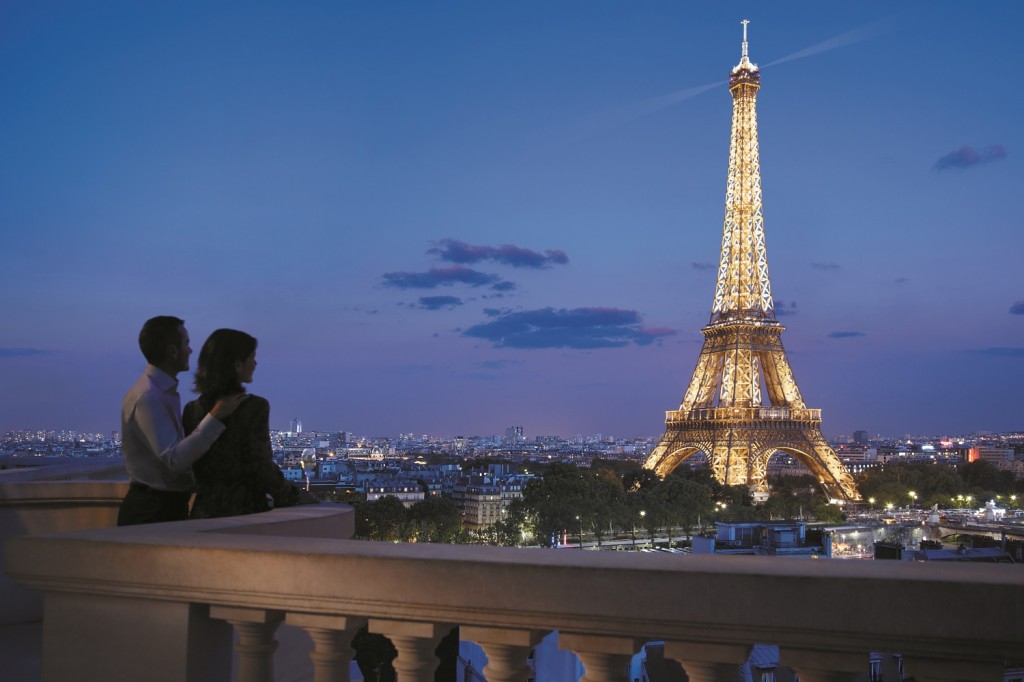 With its 275 sqm (2,960 sqft), the Imperial Suite of the Shangri-La Paris broads castle wing worthy volumes. Characterized as a historic monument, the Suite is located in the ancient apartments of Prince Roland Bonaparte. It has been renovated in a view to elegantly blend third millennium comfort with gilds and antic decoration of the place. The light-flood bathroom is enhanced with blue velvet curtains, marble and gold and crystal taps. 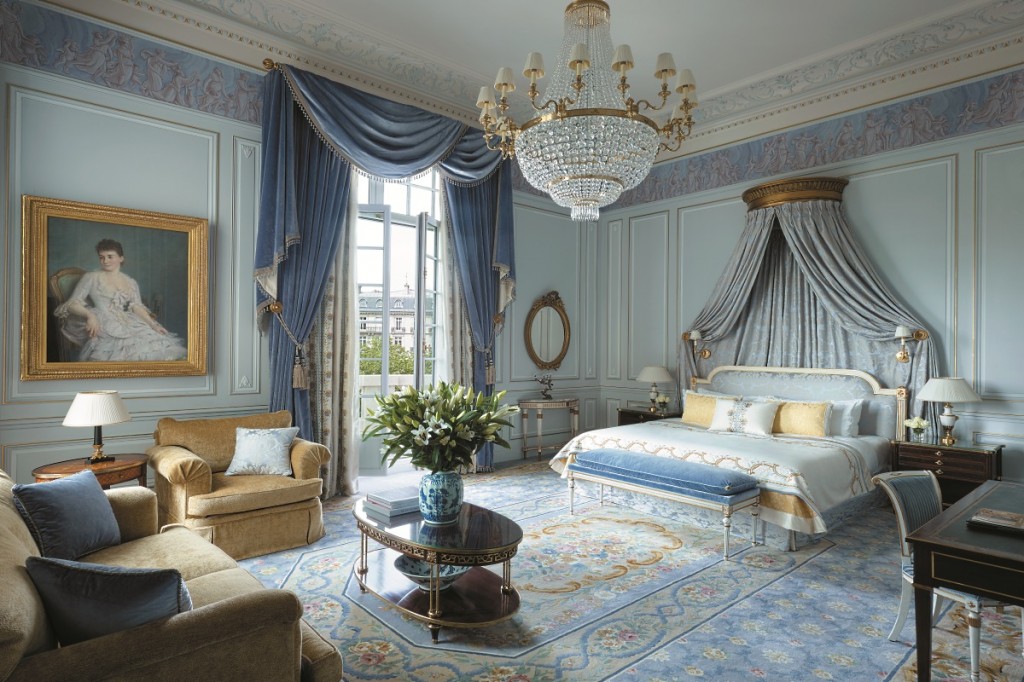 At the Shangri-La Paris, three restaurants, three atmospheres for three various cuisines, all orchestrated by two stars at the Michelin Guide and crowned best cook of 2013 by Gault & Millau Executive Chef Philippe Labbé. So the Shangri-La offers multiple possibilities to enjoy its romantic atmosphere for the span of an evening.

La Bauhinia derives its name from the five petals orchid adorning the Hong Kong flag. The restaurant looks like a winter garden theater made of red and celadon-green taffeta and silks, enhanced with vegetation and overlooked by the antic 30’s atrium. The highlighted cuisine is a mix of French and Asians inspirations from breakfast to evening dinner. It is the perfect place for savoring teas in poetic accents of Asia setting. 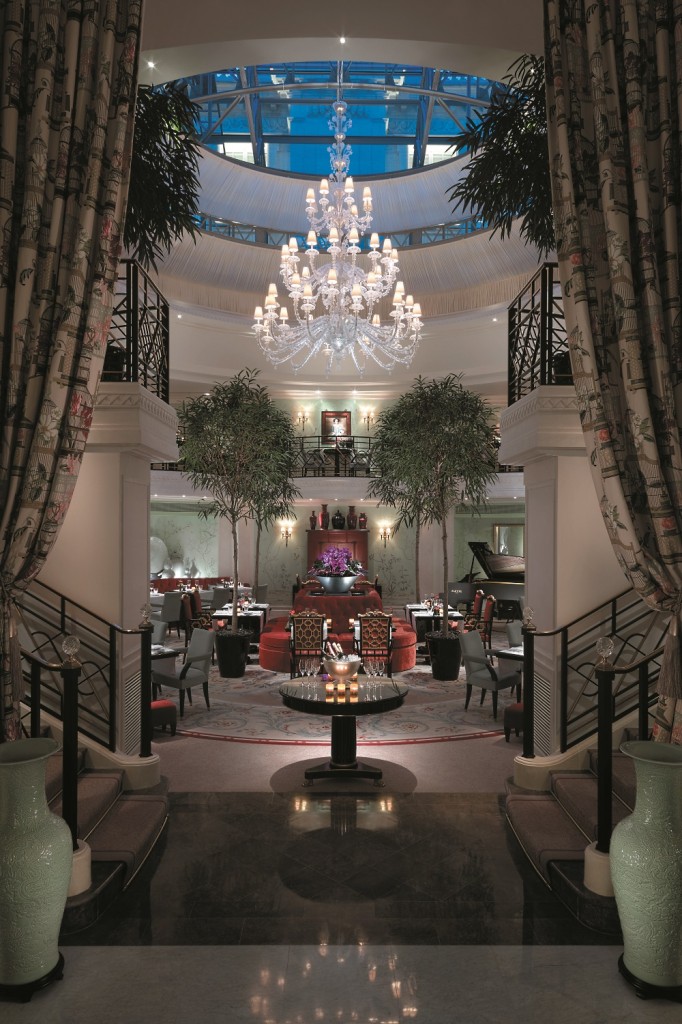 Two times starred at the Michelin Guide, L’Abeille restaurant belongs to the circle of the finest tables of Paris. The felted setting is designed around shades of silver and taupe with the bee in guest. The Lelièvre fabrics and the dishes specially created for the occasion takes up the period motifs. The Shangri-La garden draws itself through the windows. L’Abeille welcomes its hosts on the evening. 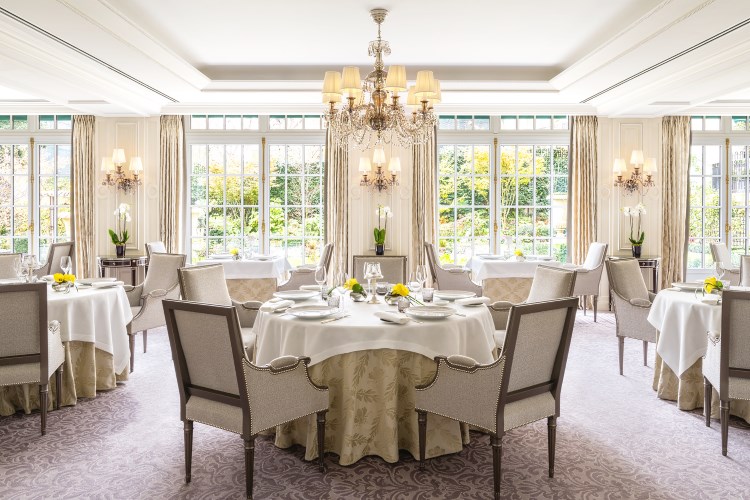 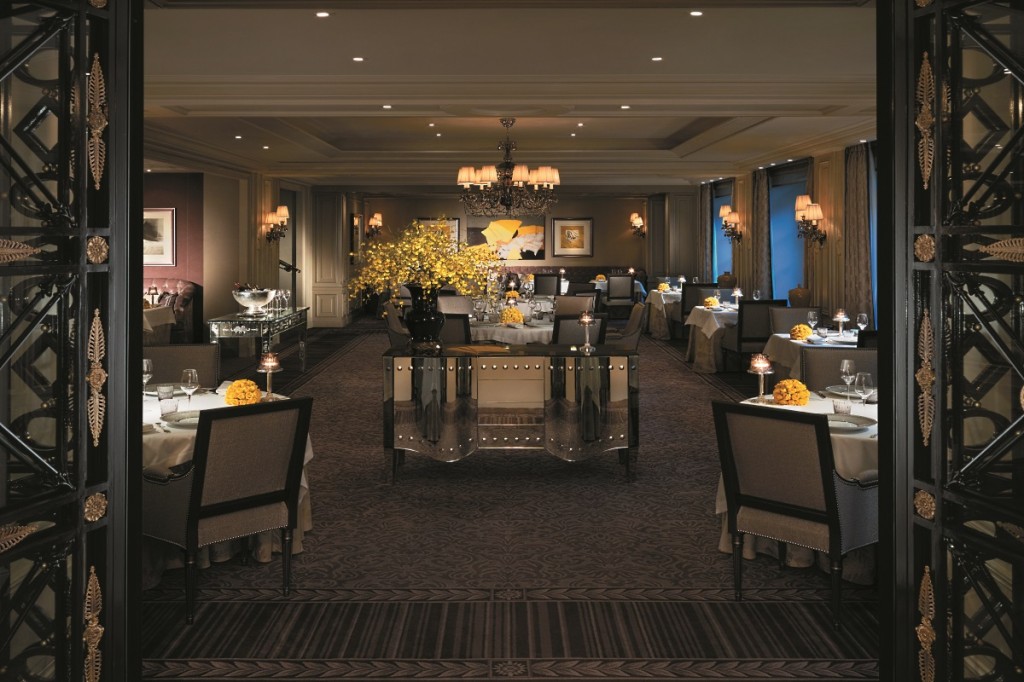 The Shang Palace offers a luxurious travel at the heart of the South-East of China. Crowned with a star at the Michelin Guide, the chef Frank Xu directs a Chinese brigade where each specialty owns its master. A fan of 60 dishes is suggested. Sumptuous chandeliers, sculpted with water lilies columns and mahogany and pearls screens perfect this exotic escape. 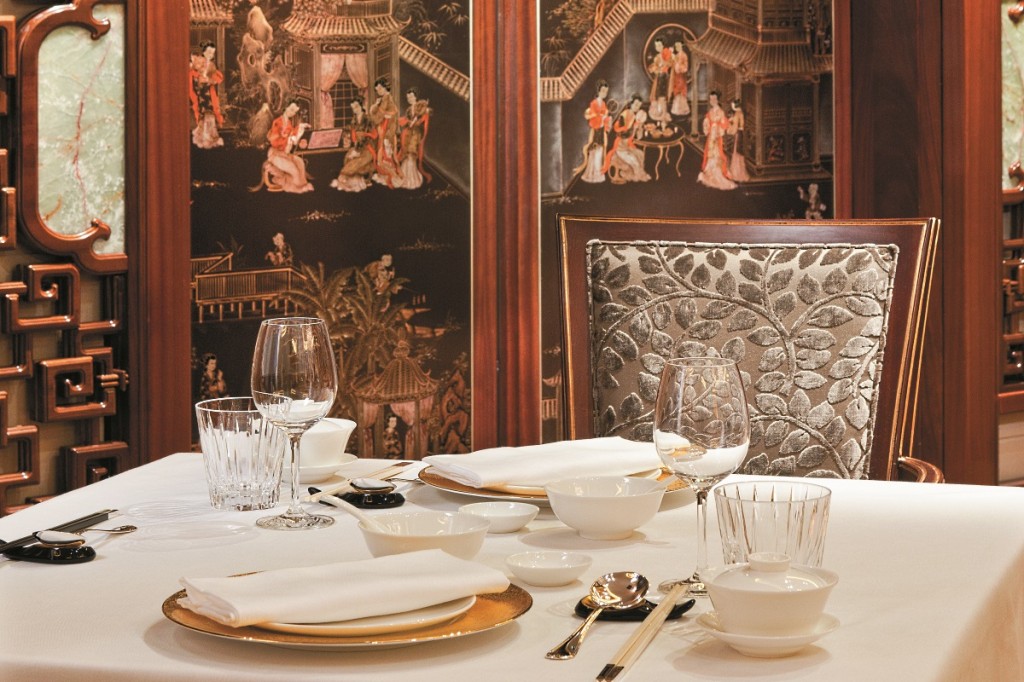 Dressed up table at the Shang Palace 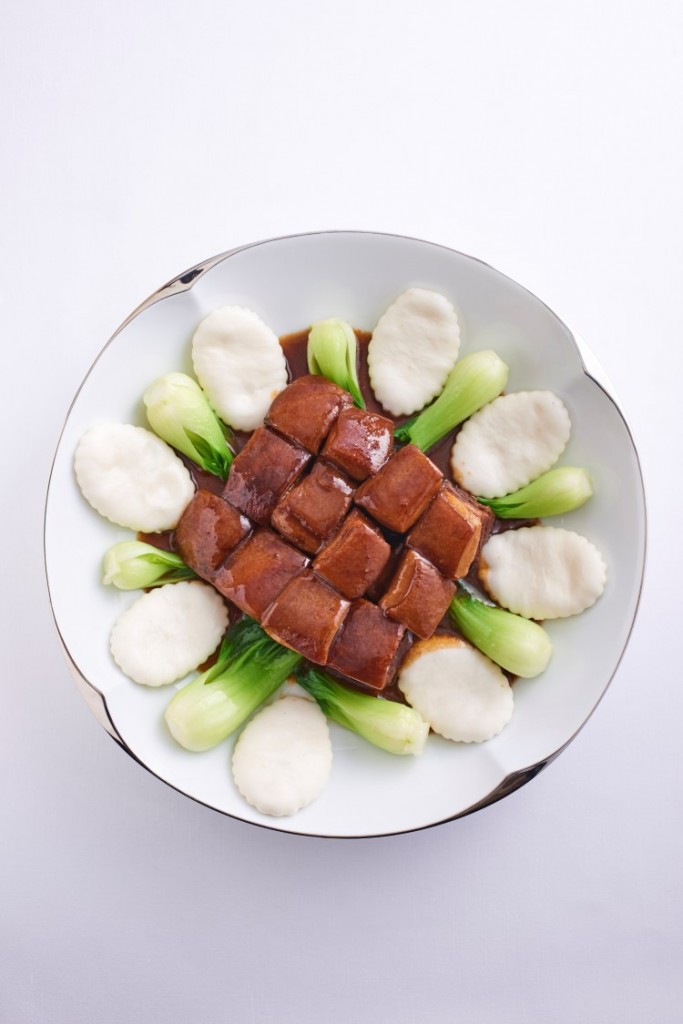 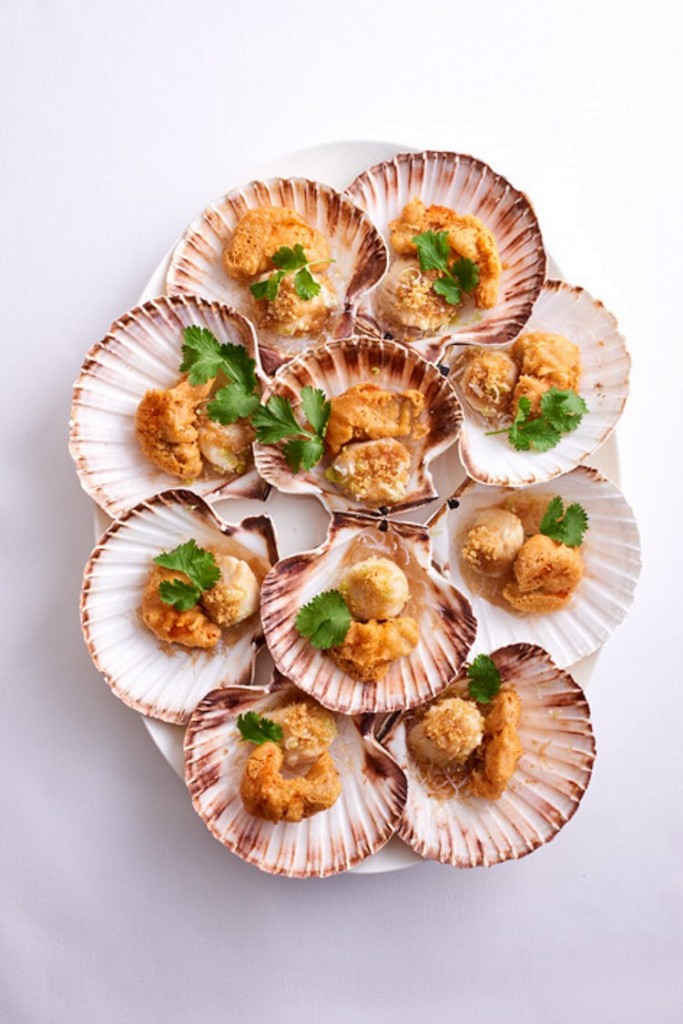 The Shangri-La Paris hotel bar was originally set as the tent of the Château de la Malmaison, in line with the Return from Egypt Napoleonic style. Celadon tones enhance black granite, mahogany and bronze. The sophisticated and cozy atmosphere makes it a preferred place for Parisians. The bar is also well known for its cocktails with Asian touches, such as “The Pink Lady”, a signature cocktail here. Adjoining living rooms are classified as historic monuments. During winter, people can gather around crackling fires. 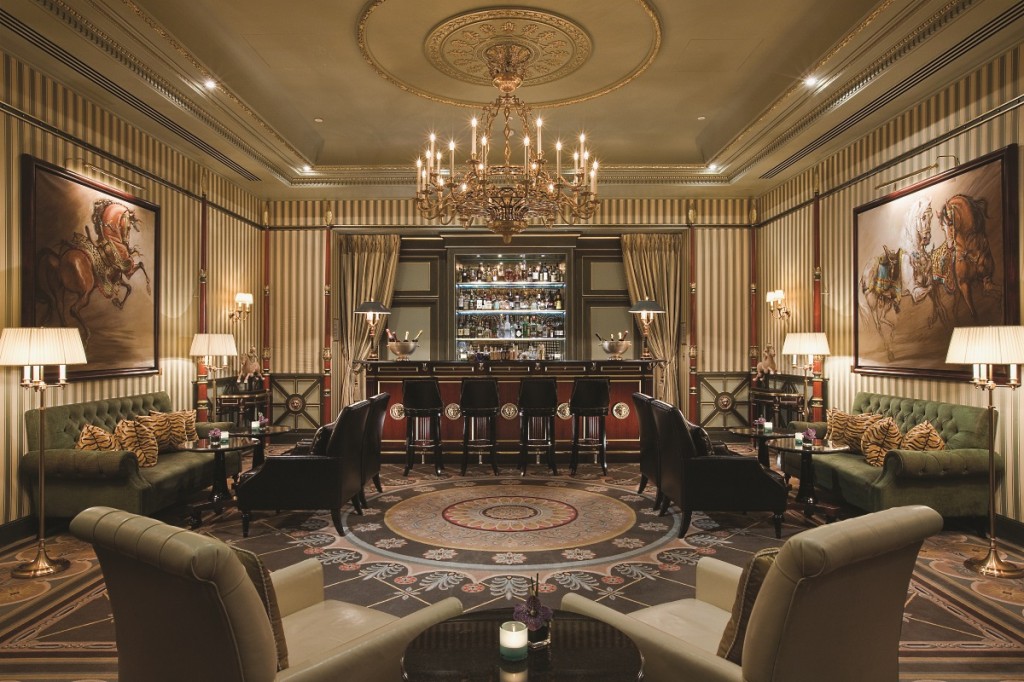 Four reception halls are available at the Shangri-La Paris to organize a dream wedding and also galas or conventions. There are sumptuous charged with history places. In 1907, the Grand Salon Louis XIV happened to be the theater of the engagement of Marie Bonaparte with the Prince of Greece and Denmark. The Salle à Manger was totally devoted to the Emperor glory. We can admire today the mahogany trophies of arms, militarist sculpted trophies and spread wings eagles, symbol of Imperial Rome and military victories. 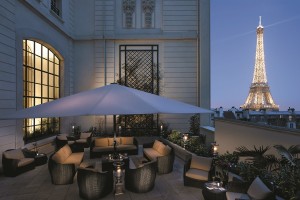 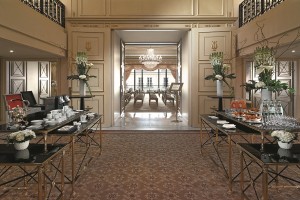 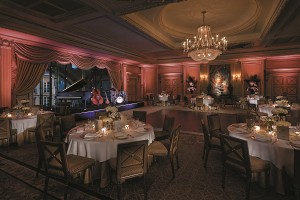 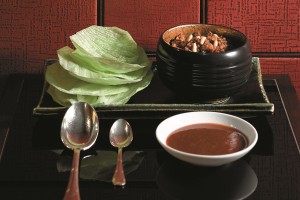 The Shangri-La Paris also broads a spa where beauty cares by Carita are delivered. The 16 meters-long and 6 meters-wide pool refers to Imperial decoration, unique! The daylight enters through the large bay windows to the level of the fitness center. 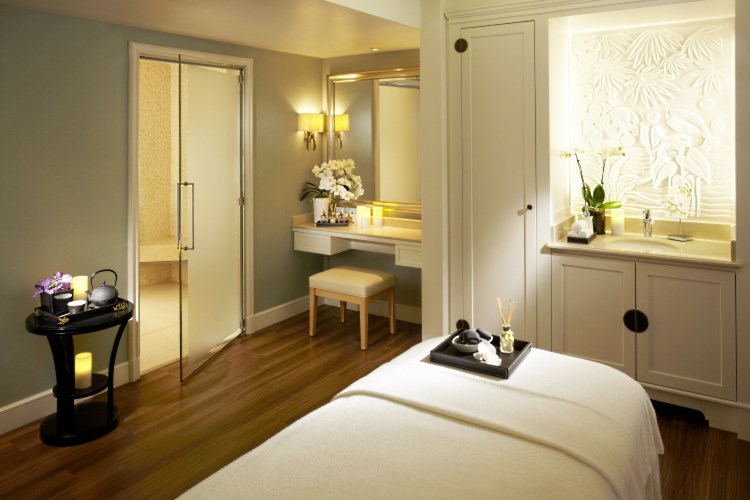 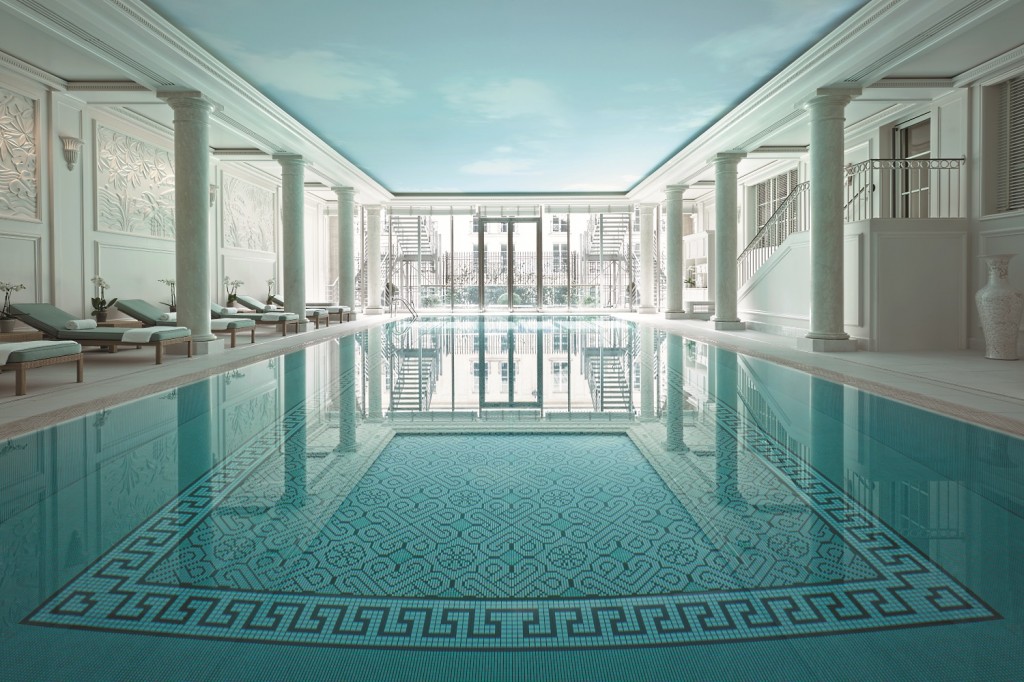