You want to discover the greatest places in Dubai? But you do not know what the best time to go to Dubai is? You have heard that it was often very hot in Dubai? You think that Dubai is too cold in Winter? Or that you would be crazy to go to Dubai during Summer? We will try to help you identify what is the best time of year to travel to Dubai thanks to detailed information about the climate in the Emirates, month by month.

In Dubai, the weather is always sunny!

Dubai’s reputation is far from being usurped. Indeed, for the weather in UAE, you have two seasons : the hot season from October to April and the hottest season from May to September. In Dubai, the rain rarely falls, if not very rarely! You can sometimes have several months without a drop of rain! There are less than 25 days of rain per year in Dubai, mainly during the winter months (January-February). These rains have the advantage to clean the city of all the dust brought from the desert by the wind.

While staying in Dubai, you sometimes encounter sandstorms, especially in summer. Depending on their intensity, they can completely block cars as well as air traffic. These dust storms are linked to a North West wind, Shamal, sweeping the desert. The storm usually lasts 3 to 5 days.

And for the temperatures, Dubai is also at the top!

During the day, the temperature rarely drops below 20°C (68°F) even during the winter months (December to February). However, at night, temperatures can drop to around 10°C (50°F) during the cooler months of the year.

In contrast, during the hottest time of year, you can expect very high temperatures if not scorching, beyond 45°C (113°F)!

In Dubai, the atmosphere is very humid in summer

With high temperatures, sometimes up to 50°C (122°F), occurring between June and September, the air picks up moisture. Thus, the air humidity exceeds 90%! This is related to the evaporation of water from the sea. The perceived temperature is then much higher than 50°C (122°F) because of this high humidity. Needless to say that it is hard to deal with this climate. Most tourists and locals spend their time cooling in air-conditioned malls and luxury hotels in Dubai.

You can swim all year round in Dubai

If you go to Dubai, it is likely to enjoy the beach and the sea. Be aware that you can swim all year round. In January, the sea temperature is a little cool with around 20°C (68°F) but you can always fall back to one of the many hotel pools that are often heated in winter. In summer, the temperature of the sea water often exceeds 30°C (86°F) but again, you can opt for the hotel pool which is often equipped with a water refresh system in Dubai. 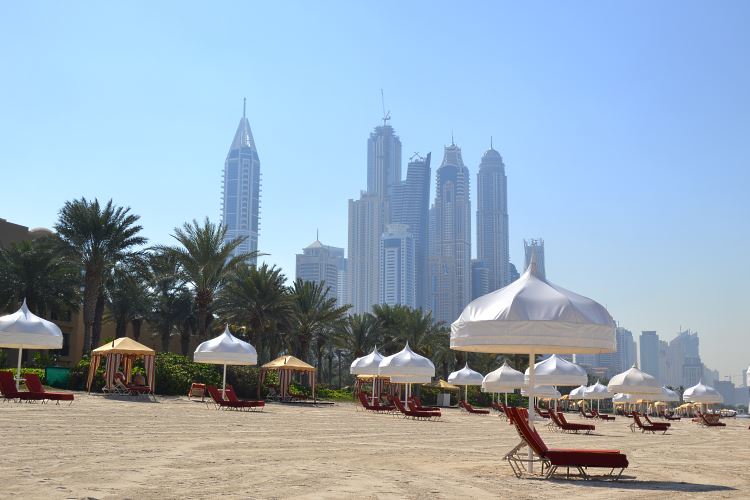 You will find below a table showing climatic average temperatures encountered during the months of the year and the number of rainy days. This will allow you to get a sense of the weather forecast you could expect depending on the time of the year where you plan to go to Dubai.

To conclude, what is the best time to travel to Dubai?

It is customary to say that from November to April, the climate of Dubai is nice. In fact everything depends on the references of each individual. A person accustomed to the sun will not have the same expectations as a person living in a rainy region. January is the coldest month of the year in Dubai but the temperature is still very nice.

If you want to compare to Europe :

And if you compare the climate of Dubai with the United States :

The cold season or should I say the cooler is also the high season for tourism. Hotel prices are higher (easily 50% more compared to the summer months). The month of January is very pleasant to visit Dubai but it is during this month that the Dubai Shopping Festival is taking place and it attracts millions of visitors so the hotels are pretty filled. In short, from November to March, the weather is good and conducive to discover the gems of Dubai.

One thing is clear, you will never be disappointed with the weather in Dubai because it’s nice and warm all year round!

Now you’re ready to go! Do not forget your sunglasses and your bathing suit! And if you have forgotten them, do not panic, you will easily find some in the malls of Dubai.