The island of La Réunion is located in the Indian Ocean, between Mauritius island and Madagascar. La Réunion is a region of France.

Things to do in La Réunion

La Réunion is the perfect place to practice hiking. There are few jewels to discover in La Réunion such as Le Piton des Neiges or Le Piton de la Fournaise (active volcano). You can also take an helicopter tour over the island to enjoy the beauty of the natural environment from the sky.

There are few beaches in La Réunion but regular shark attacks over the last few years are resulted in the temporary ban of swimming and surfing in the sea. It is however still possible to find few beaches where swimming is allowed.

Every year in October, La Diagonale des Fous (also known as the Grand Raid de la Réunion), an ultra trail race, allows top runners to cross the island from the south east to the north west. This is a 170 Km journey with around 10.000 m of elevation gain thus making it one of the most challenging race in the world. It takes more than 20 hours of efforts for the winner to reach the finishing line.

Get to La Réunion

There is an international airport at Saint Denis (Roland Garros) with direct flights coming from France, South Africa, Mauritius, Seychelles and India.

La Réunion climate is tropical. Between April and October, the weather is nice with pleasant temperatures between 20 and 25°C. Between November and March, this is the hot season with temperatures above 30°C and some heavy rainfalls, especially on the east coast.

Our selection of websites to learn more about La Réunion :

Our selection of luxury hotels in Réunion 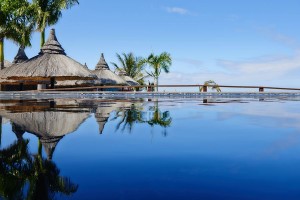